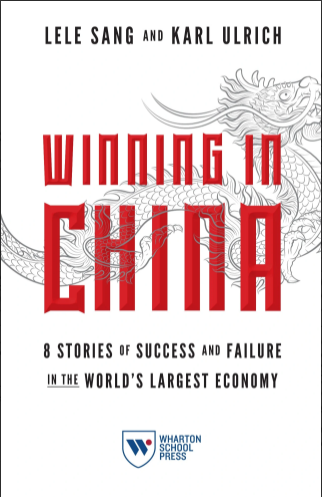 IN “WINNING IN CHINA: 8 STORIES OF SUCCESS AND FAILURE IN THE WORLD’S LARGEST ECONOMY,” AUTHORS LELE SANG AND KARL T ULRICH EXPLORE THE FORTUNES OF WELL-KNOWN COMPANIES IN CHINA, INCLUDING AMAZON, NORWEGIAN CRUISE LINE, HYUNDAI, LINKEDIN, SEQUOIA CAPITAL AND INMOBI. PAUL FRENCH SPOKE WITH LELE SANG TO FIND OUT WHAT SET THE WINNERS APART

Let’s first consider a massive global heavy hitter that failed in China – Amazon. What went wrong in China given that they seem to have just about everything right elsewhere?

One of the main reasons that Amazon failed in China is that its flywheel failed to function there. The key components of Amazon’s flywheel include its vast selection of products, low prices and strong logistics network. Yet Amazon’s selection in China was much narrower than its local competitors’ offerings. That’s because Amazon used the “Buy Box” [the company’s algorithm-driven Add to Cart function], which unfortunately was not well accepted by third party sellers, and who ended up choosing to sell through Amazon’s rivals.

Amazon’s low prices were also threatened when Chinese rivals launched aggressive price wars and created shopping festivals including the famous Singles’ Day. Amazon’s logistic network was outperformed by its Chinese rival JD.com when JD.com built its own logistic network that effectively combined the strength of both Amazon and UPS. That being said, Amazon didn’t possess any resources that gave it competitive advantages.

Amazon also made many mistakes in terms of managerial decisions: It didn’t commit to the Chinese market; its governance structure didn’t grant autonomy to its China unit; its local management team lacked a skillset to compete with Chinese entrepreneurs, and stuck with the same operational model that didn’t fit China.

On the other hand, LinkedIn has done well in China. What did it get right that all the other international internet giants have got wrong?

LinkedIn definitely did certain things right. Learning from other internet companies’ failure in China, LinkedIn created a new operational model: it formed a joint venture with Chinese venture capital firms to gain connections and regulatory benefits; it had its own board, separate from that of the parent company; its China team was offered stock options – a similar reward system as other start-ups – and its China president reported directly to the global CEO.

These were good moves and contributed to its smooth sailing initially. Yet LinkedIn’s strategy quickly shifted to building a new product – Chitu just for the Chinese market. In this way, it voluntarily gave up its only edge, namely the global network, putting it in the same position of its competitors.

Even today, LinkedIn has only partially realised “product-market fit” in China. It has been primarily perceived as a high-end job hunting site, but not a professional networking platform. As a result, user retention rate remains low. Whether LinkedIn has done well is still debatable, but we’d like to quote the LinkedIn executive who appeared in the story, saying: “We managed to beat everyone by still being there (China).”

Another failure that is instructive for other companies is Norwegian Cruise Line. They were in a seeming boom market, with no well-known local players for competitors, a great reputation … yet they are no longer operating in China. What happened there?

The conventional wisdom is that when you go to a foreign market, you need to tailor your offering to local customers. That’s exactly what Norwegian Cruise Line did. It made tremendous efforts to make its ship Chinese: the topsides had a 333-meter-long artwork depicting a phoenix, representing good fortune in Chinese culture. Inside the cruise ship there were Chinese restaurants, Chinese tea houses, karaoke rooms, gaming rooms with mahjong sets, a ‘tranquillity park’ offering tai chi classes. But despite this, ironically what they did didn’t give them an edge, so instead it backfired.

It turns out that “Westerness” is an attribute that Chinese consumers valued. The cruise industry didn’t exist in China until Italy’s Costa Cruises sent in its first cruise ship in 2006. Cruising remains to many a foreign concept. When Chinese consumers get on a cruise ship, they expect an exotic western-style experience. The China-specific design looked too familiar to attract Chinese consumers.

You also offer some useful general guidelines for companies to consider when thinking about China – your so-called ‘Three Necessary Conditions’. Could you give us an idea of these and why they are so important?

The “Three Necessary Conditions” include demand, access to the market, and competitive advantages. A foreign company must provide a product or service that meets a demand. And though nearly any need that exists in one’s home market exists in China, consumer preferences can still vary. For example, given the culture difference, the demand for online professional networking is not yet evident, that’s part of the reason that LinkedIn hasn’t reached its goal in China.

The last condition is a potential source of competitive advantage. Ultimately all competitive advantage arises from controlling some resource or asset that helps deliver a solution to customers and that cannot readily be acquired by rivals. We call these resources the firm’s alpha assets. Alpha assets may include efficient production systems, brands valuable to consumers, or proprietary products.

If companies pass the hurdle of the ‘Three Necessary Conditions’ then come the ‘Five Managerial Decisions’ essential to success that you outline in the book. What are these?

The “Five Managerial Decisions” are actual decisions that managers make in entering China. They are commitment, governance structure, leadership, strategy, and the product.

The commitment required to succeed in China is usually larger than for any other foreign market. But we often see firms fail to realistically forecast the costs required and lose enthusiasm once reality proves more expensive than their projections. Governance refers to the structure and administration of the relationship between the China unit and the parent organisation. This often decides the autonomy the China unit has and whether the China unit can be agile – important factors for success in China.

Successful leadership at a foreign company’s China unit often requires entrepreneurship. Corporate-savvy managers must be entrepreneurial and also know how to marshal resources and win support at headquarters for their plans. Strategy refers to the top-level plan for entering the market and achieving sustainable success. If a firm has a clumsy strategy, it will likely stumble, even when it enters a booming market with a strong commitment and capable leadership. Last but not least, product-market fit is also essential. This fit can be influenced by consumers’ price sensitivity, their cultural norms and preferences and their alternatives.

There are no UK companies in your list of case studies, but are there any UK firms, products or brands that have caught your attention in China either as solid successes or terrible failures?

Dyson has achieved tremendous success in China. The company generates around half of its revenue from Asia, and China is one of its top three markets. It entered China in 2013 and now operates more than 800 stores there. Its vacuum cleaners, hair dryers and stylers are quite popular among Chinese consumers. On Singles Day 2019, Dyson sold 20,000 units of hair dryers in 10 minutes on JD.com and generated more than £10 million sales on Tmall (Alibaba’s e-commerce platform). The company even moved its headquarters to Singapore to be close to its customers. If you use our framework to analyse Dyson’s success, it’s clear that it has checked many boxes.

Tesco would be the opposite. The retail giant came to China in 2004 and struggled to crack the market from that moment on. In 2014, it formed a joint venture with a Chinese partner, combining its 131 stores in China with its partner’s around 3,000 stores. In 2020, Tesco sold its joint venture stake to its Chinese partner and completed its exit from China.

About the authors: Lele Sang is a Global Fellow at the Wharton School at the University of Pennsylvania and a former journalist and editor who has previously worked for Beijing News and Caijing Magazine, covering business and politics. Karl T. Ulrich is Vice Dean of Entrepreneurship and Innovation and the CIBC Professor of Entrepreneurship and e-Commerce at the Wharton School.

Many common mistakes can be avoided when entering the China market. For access to market intelligence, connections to businesses and government leaders and the chance to network with sector experts, consider joining CBBC. You can find out more by clicking here.