Sunamp, Glencairn Crystal and Virens Technology were among the winners at this year’s China-Scotland Business Awards last night.

The Awards were announced and presented at the Chinese Burns Supper held by CBBC, in Edinburgh.

East Lothian-based Sunamp won the Award for Climate Action thanks to its world-leading thermal storage technologies, which are transforming how we use energy and provide heat around the world.

The Chinese Investor of the Year Award was won by Virens Technology, which is aiming to innovate the property management industry by using Internet of Things (IoT) sensors and radar technology to support sustainability. Founded in 2020 in Hong Kong and Shenzhen, the company now has teams of engineers based in Edinburgh and Glasgow.

Virens Technology won the Award for Chinese Investor of the Year

Family-business, Glencairn Crystal, the creators of the world's favourite whisky glass, won the Award for Exporter of the Year. They have been supplying the whisky industry with premium glasses and containers for 40 years, with 80% of everything they make now sold or distributed outside the UK, including a growing market in China. 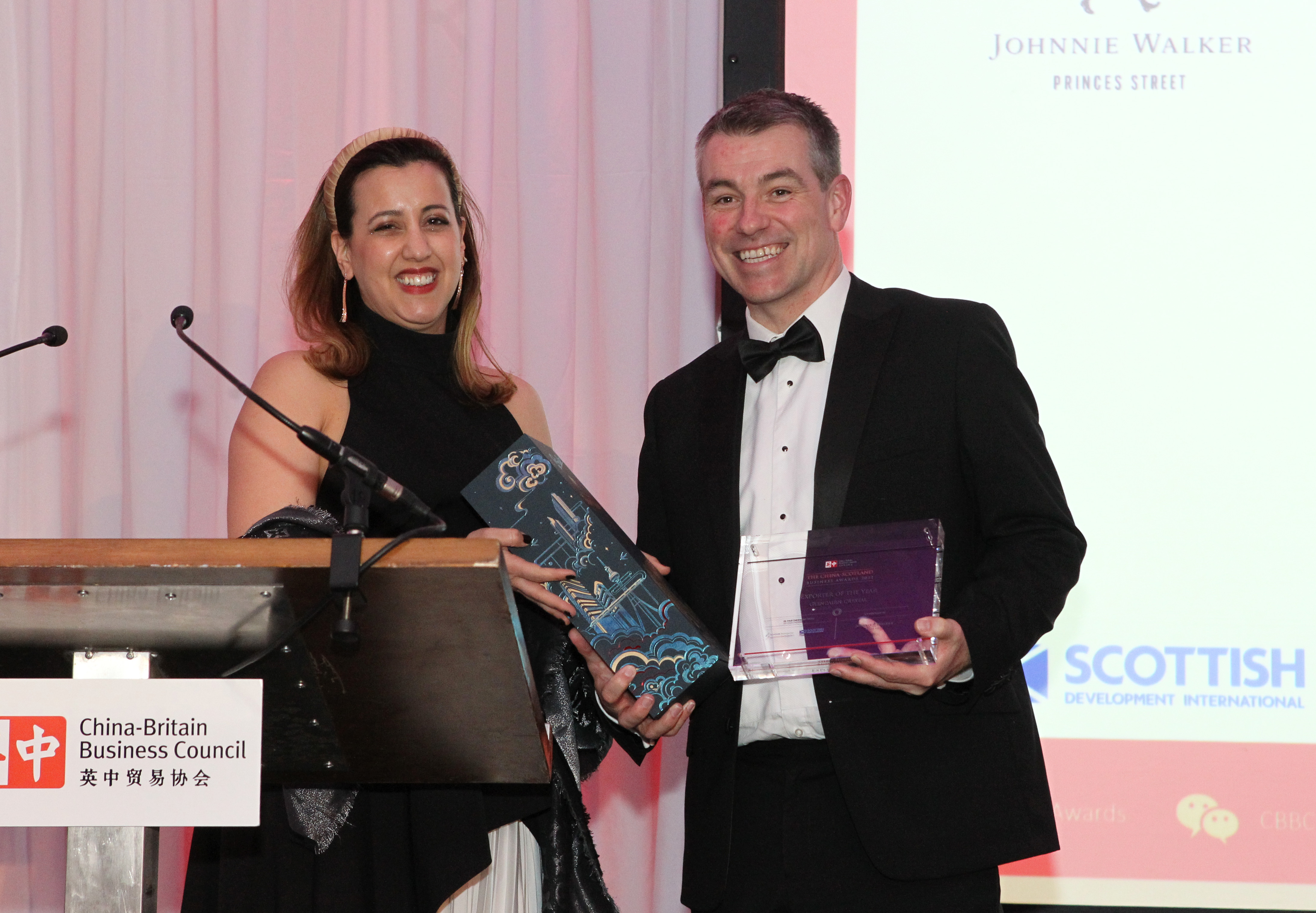 Glencairn Crystal won the Award for Exporter of the Year

The Award for Educational Partnership of the Year was won by the City of Glasgow College and Zhejiang Technical Institute of Economics. Over 200 students have so far graduated with a Certificate in Supply Chain and Logistics thanks to the partnership, despite facing huge challenges during the pandemic. 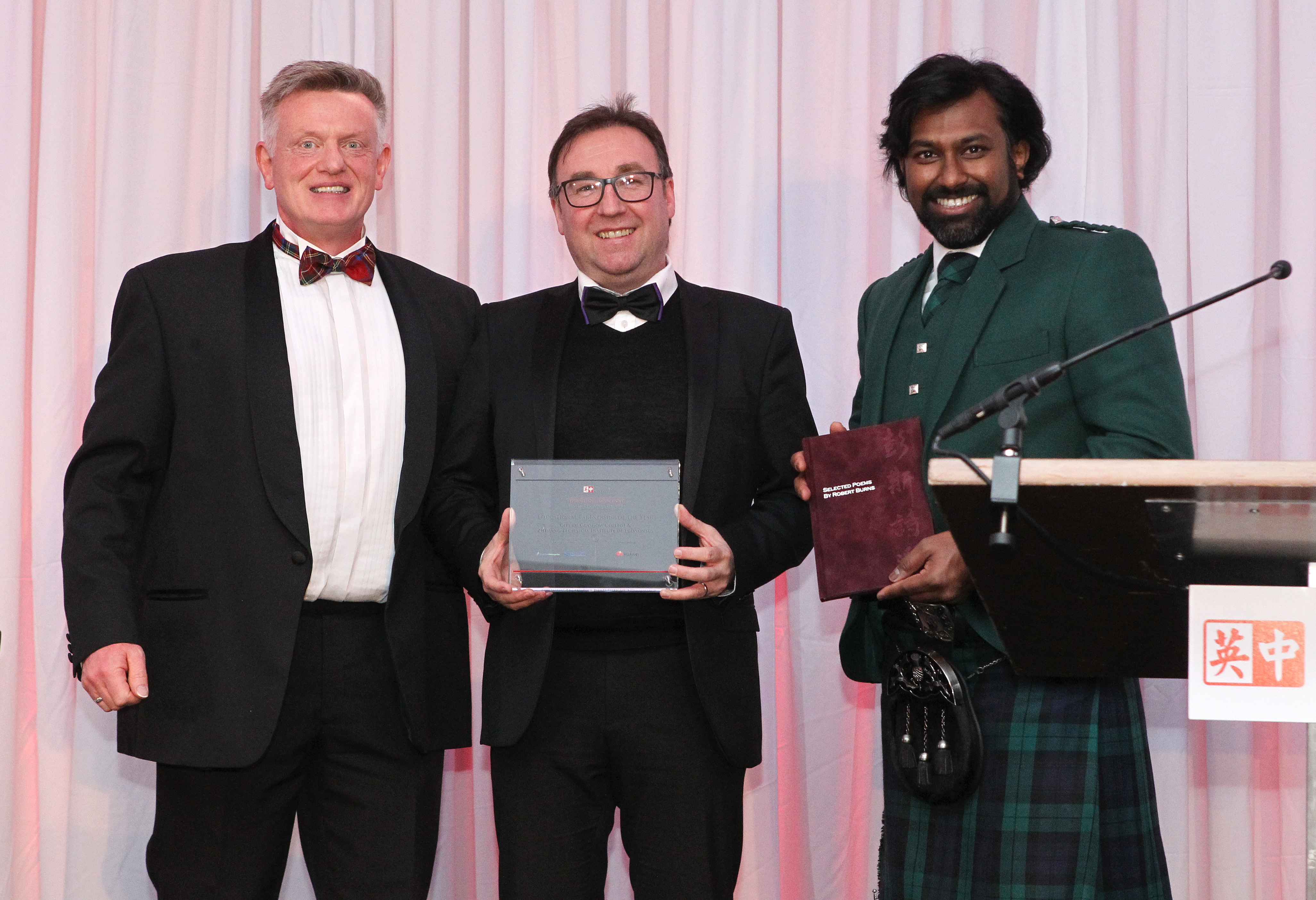 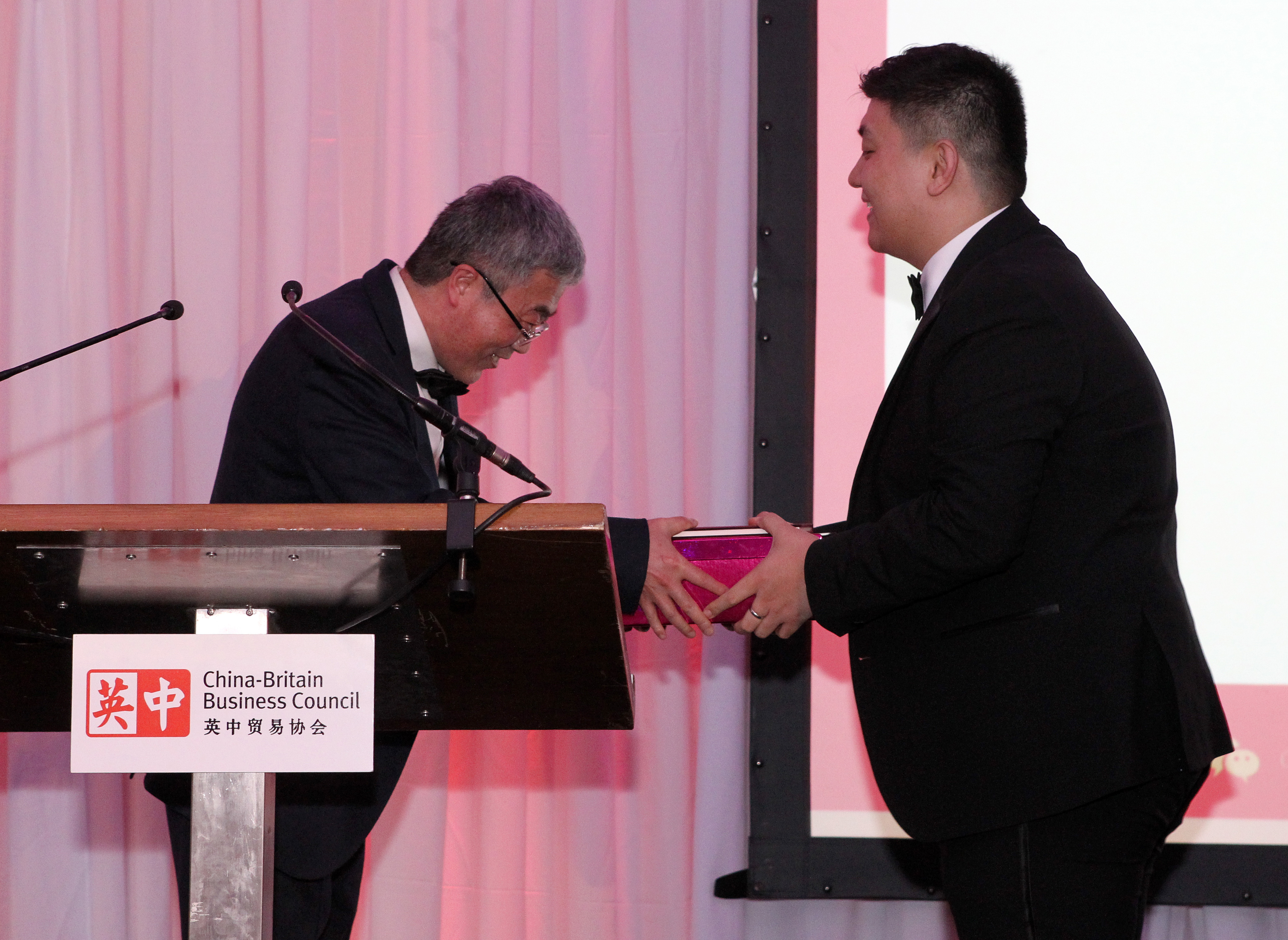 Entrepreneur of the Year was won by Zhang Yuxuan

This year’s Awards featured a special new addition: The Lifetime Achievement Award – which CBBC’s Chief Executive, Andrew Seaton was delighted to present to the Principal and Vice Chancellor of the University of Strathclyde, Professor Sir Jim McDonald. 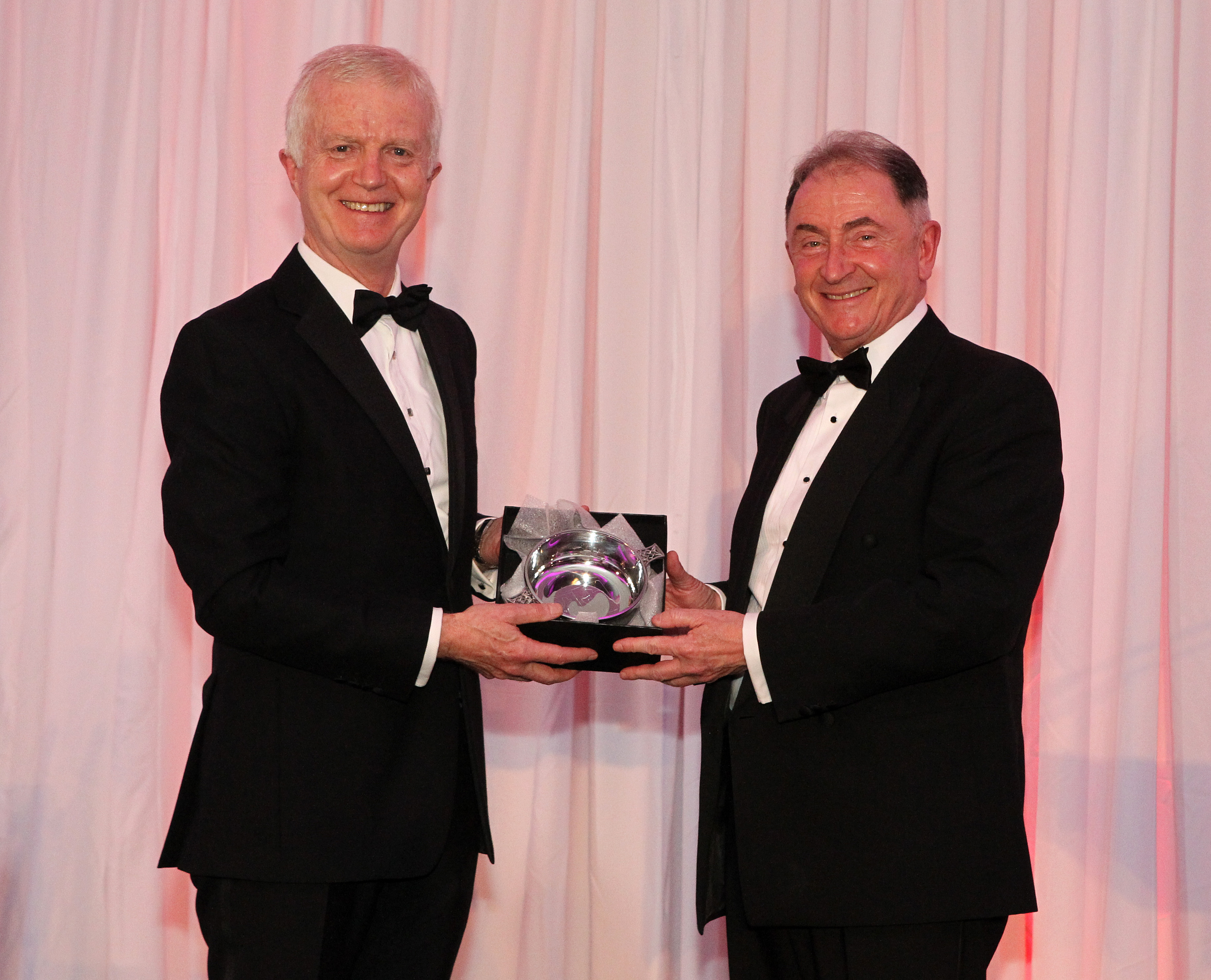 The Lifetime Achievement Award was presented to Principal and Vice Chancellor of the University of Strathclyde, Professor Sir Jim McDonald.

Now going into its ninth year, CBBC’s Chinese Burns Supper has become a permanent fixture in the China-Scotland business calendar.

The event featured a fusion of Burns Night traditions with those of Chinese New Year as a backdrop for black-tie networking for the China-Scotland business and educational community. 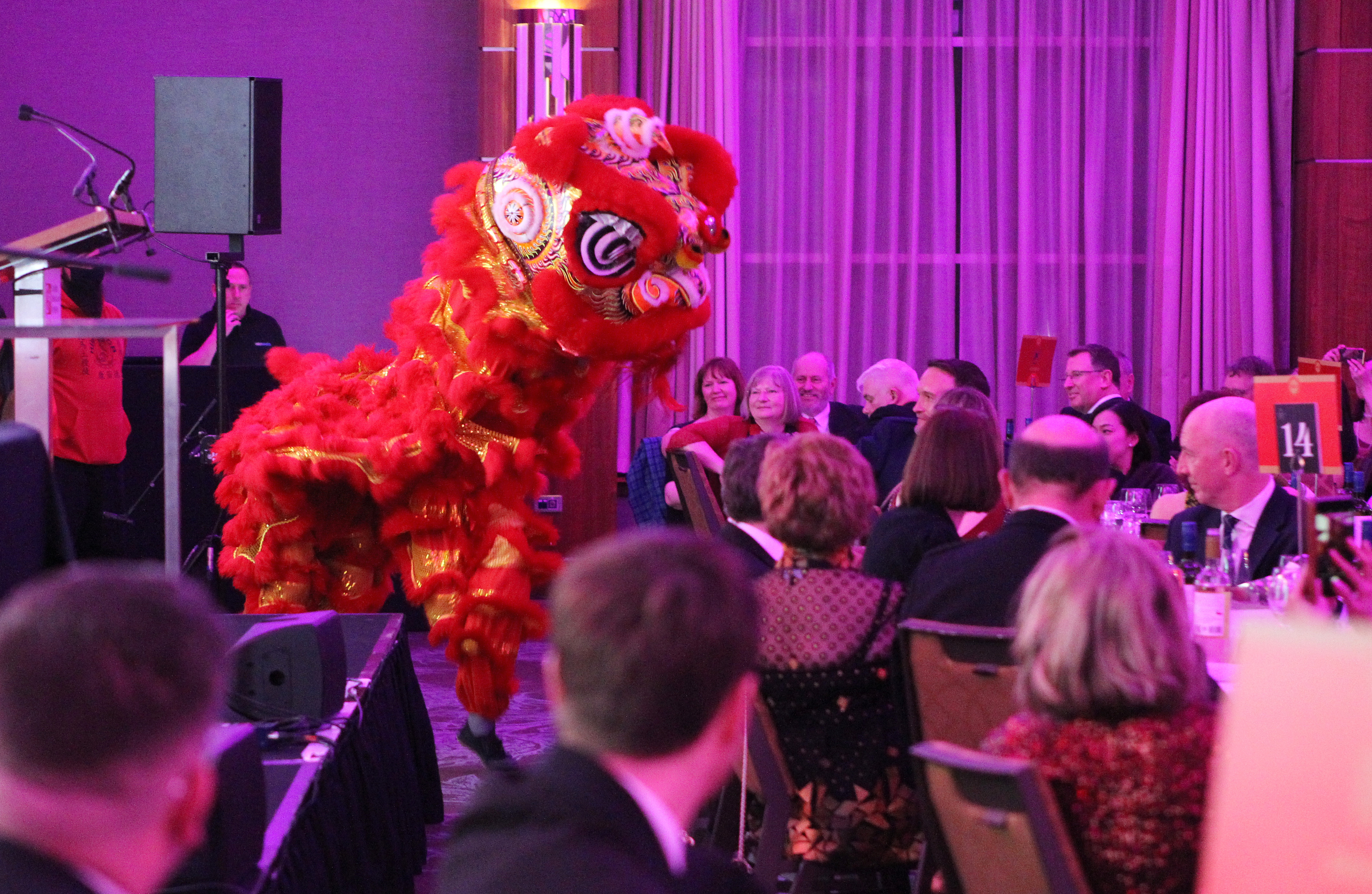 Guests enjoyed a Lion Dance at the event

Funds were raised for the Royal Botanic Garden Edinburgh to support their long-term conservation work in partnership with Kunming, Yunnan in south west China, where the UN Biodiversity Conference - COP15 - will take place next month.

Scottish exports to China were worth roughly £381 million in the first quarter of last year. In particular, exports of beverages have increased in recent years, soaring 120% between 2020 and 2021.

Economic ties with China through trade, tourism, and universities support between 8,100 and 10,000 jobs in Scotland, according to 2020 data from Cambridge Econometrics. 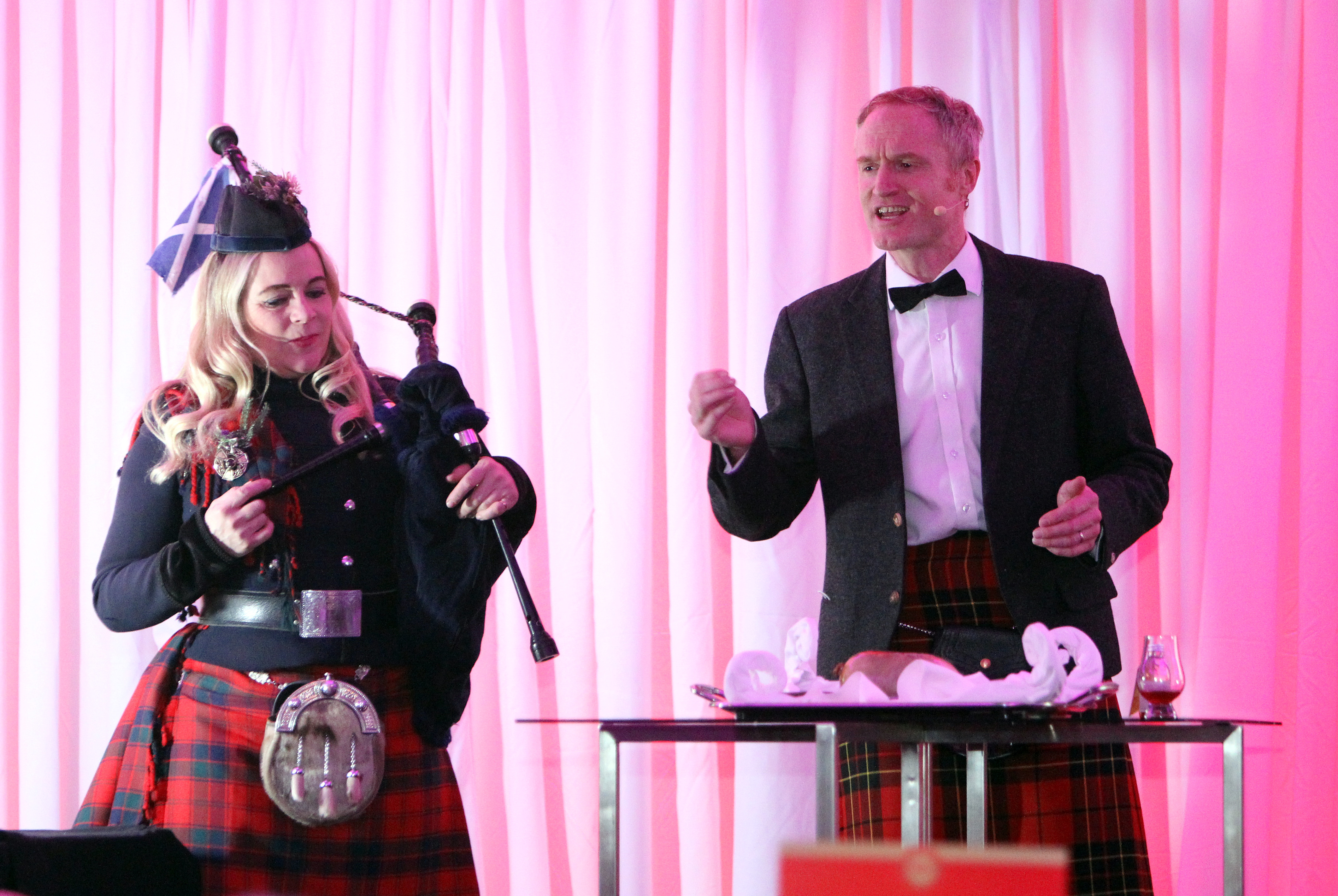 “Despite the pandemic we’re still seeing a good number of Scottish businesses taking advantage of the huge opportunities the Chinese market has to offer.

“That is translating into investment, growth and jobs here in Scotland.

“We want to recognise the vital work being done in areas such as climate change and education, as well as celebrating some of the huge success stories in exports and entrepreneurship.”

The nominees for each category were:

Entrepreneur of the Year

Educational Partnership of the Year

Chinese Investor of the Year

Exporter of the Year

Looking back to last year’s Awards in 2021, the winners included Chinese Investor of the Year, Logan Energy, which specialises in the delivery of engineering solutions for integrated hydrogen technology systems. They attracted £1 million of investment from Henan Lanxing Power Equipment Co. to help develop the hydrogen market in China.

2021’s Entrepreneur of the Year was James Buchan, who founded Dundee-based Zudu in 2014 to focus on digital marketing, development, and strategic consulting for both the UK and Chinese markets.

View the official photos from the event here.

For further enquiries related to the Awards please email James Brodie at James.Brodie@cbbc.org