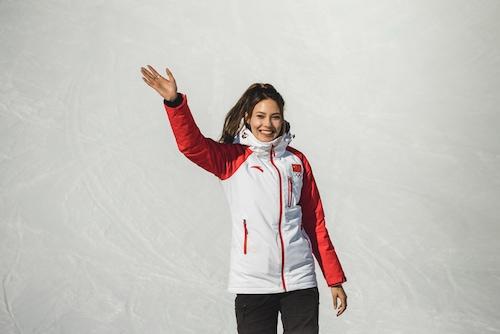 WITH SALES OF NIKE AND ADIDAS IN CHINA WEAKENING, CAN CHINESE BRANDS LIKE ANTA STEP IN TO FILL THE GAP? JULIETTE PITT LOOKS AT HOW THE BEIJING 2022 WINTER OLYMPICS AND A PARTNERSHIP WITH EILEEN GU ARE HELPING TO CEMENT ANTA AS A MARKET LEADER.

China’s athleisure market is booming. As more and more Chinese people make fitness part of their daily schedule, China’s sportswear market has become the second-largest in the world behind the US. In 2019, the retail value of the Chinese sportswear market reached an estimated RMB 316.6 billion (£36.8 billion). Foreign athletic wear has long been favoured by Chinese consumers, with brands such as Nike and Adidas maintaining a leading position in the market over domestic Chinese brands primarily due to their high quality.

However, in recent years the direction of the sportswear market has shifted, and Chinese sports brands such Anta and Li Ning are rapidly closing in on foreign companies. Whilst these brands are virtually unheard of outside of China, they are becoming ubiquitous in their home country.

Anta (established in 1991) is currently ranked third in terms of market share behind Nike and Adidas. In the first half of 2021 alone, Anta Group generated revenues of RMB 22.8 billion (£2.6 billion), markedly exceeding the revenue levels of Adidas by RMB 4.5 billion (£500 million) and doubling that of Li-Ning’s. Furthermore, Anta topped online sales on Tmall with Nike and Adidas coming in second and third, respectively. Industry experts predict that if Anta continues at its current growth rate it will soon overtake Adidas in market value and marginally trail behind Nike.

Nevertheless, there is still room for growth for foreign sportswear brands, but they need to understand the reasons behind Anta’s rapid rise if they want to succeed in the market.

What factors are driving Anta’s growth?

In March 2021, Nike and Adidas suffered from consumer boycotts in response to their widely stated policy of not using cotton grown in Xinjiang. On top of these political challenges, both companies have also been struggling to win over young Chinese consumers who are generally more in favour of homegrown brands. As part of a trend dubbed guochao (literally ‘national trend’ or ‘Chinese fashion trend’), many young consumers are displaying a stronger preference for Chinese brands.

Anta has benefited hugely from control of its factories and stores. Unlike Western rivals who have to negotiate with third-party factories and retailers to prioritise the production and display of their products, Anta has in-house factories and stores. Therefore, it is able to produce and market a new shoe line, for example, in around six to nine months which is approximately half the timeframe of brands such as Nike.

In recent years, Anta has also bolstered research and development funding to improve the quality of its products. Its aim is to raise the public perception of Chinese products and help reduce China’s reliance on foreign brands. By investing in technology and outfitting elite athletes at the Tokyo 2020 Olympics, the hope is to gain an advantage over overseas brands by selling products that are both high quality and low in price. 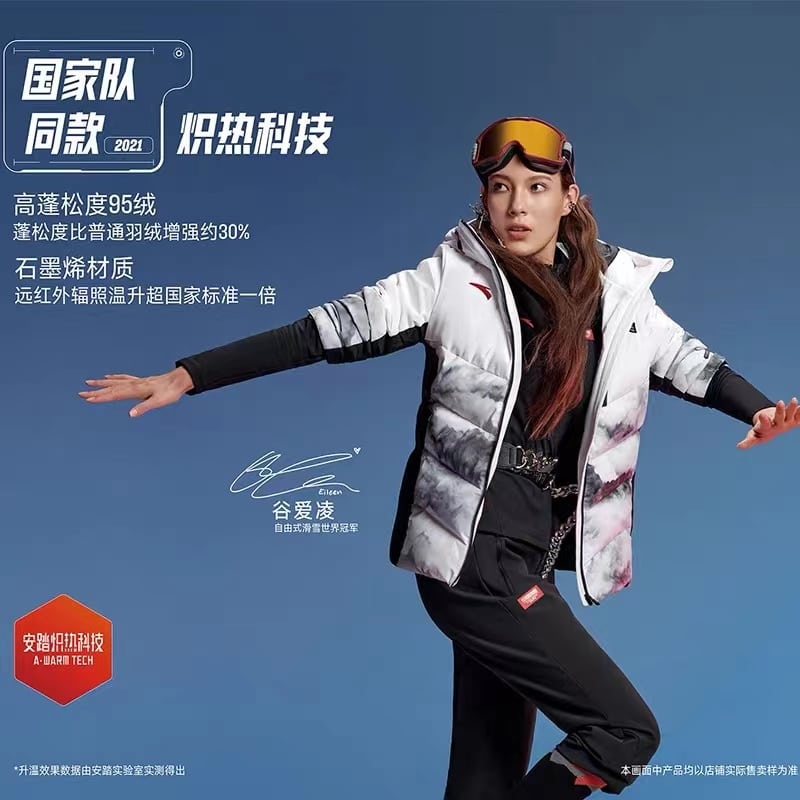 Anta has benefitted from having wildly popular skier Eileen Gu as a brand ambassador
Anta’s marketing efforts have also helped it gain greater recognition in a highly competitive market. Not only has the company landed landmark sponsorships with American NBA players like Klay Thompson and wildly popular Chinese-American freestyle skier Eileen Gu, it was also chosen to supply the uniforms for Chinese athletes and staff members for the Beijing 2022 Winter Olympics. President Xi Jinping even wore a dark blue Arc’teryx parka to the opening ceremony. While Anta has served as an unofficial sponsor for past Olympics, for this year’s games it has become the official supplier and sponsor, as well as the licensed supplier of uniforms for the International Olympic Committee (IOC) and its staff members. These partnerships have been a great success; Anta’s shares are up 67% since it signed Gu as its brand ambassador in January 2020.

An appetite for expansion
One of Anta’s main ambitions is to become a global household name through a multi-brand, multi-channel strategy. It started this journey in 2009 when it acquired the trademark of the Fila brand in China. Anta operates the Fila business and Fila stores in China, as well as the stores of Asian brands like Descente and Kolon Sport.

Nevertheless, Anta remains relatively unknown outside of China, and if it wants to expand, it will face challenges in the form of more complicated legal frameworks and the possibility of trade disputes, which together might make it difficult for Anta to quickly achieve global recognition.

Anta provided the kit for Chinese athletes at Tokyo 2020

The future of Chinese sports brands
While it may be struggling with brand recognition outside of China, the rapid rise in Anta’s share prices reflects the company’s increasing competitiveness.  The Winter Olympics has given Anta an enviable boost in both visibility and stock value, with the value of Anta Sports Products Ltd. (listed on the Hong Kong Stock Exchange) rising as much as 5.2% ahead of the opening ceremony on February 4. Together with increased government support and the strong desire of Chinese consumers to “buy local,” there is therefore considerable potential for Anta to expand its customer base in China and around the world.