WHAT DOES THE RCEP FREE TRADE AGREEMENT MEAN FOR FOREIGN INVESTORS IN CHINA? 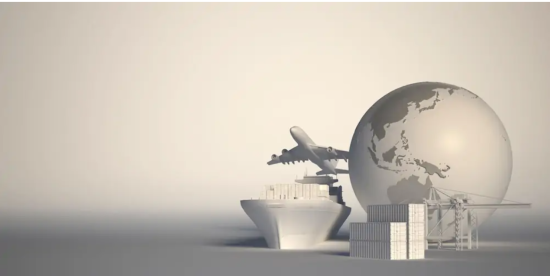 THE RCEP FREE TRADE AGREEMENT WILL DELIVER SUBSTANTIAL NEW TRADE AND INVESTMENT OPPORTUNITIES WITHIN THE PARTICIPATING COUNTRIES. DEZAN SHIRA & ASSOCIATES’ CHINA BRIEFING EXAMINES THE BACKGROUND TO THE RCEP AND WHAT SPECIFIC BENEFITS IT COULD CREATE FOR BUSINESSES OPERATING IN CHINA.

On 22 March 2020, China and 14 other countries signed the Regional Comprehensive Economic Partnership (RCEP) Agreement at the virtually-hosted ASEAN Summit, formalising the largest free trade agreement (FTA) in history. On 22 March 2021, China’s Ministry of Commerce announced that China had taken the lead in ratifying the RCEP and the ratification process had been finalised. According to a notice issued by the ASEAN Secretariat (the depositary body of the RCEP) on 3 November 2021, RCEP has now reached the threshold of entry into force and will take effect on 1 January 2022.

The landmark agreement consists of 15 countries: 10 member states of the Association of Southeast Asian Nations (ASEAN), plus China, Japan, South Korea, Australia and New Zealand. While China is party to a number of bilateral trade agreements, this is the first time it has signed up to a regional multilateral trade pact.

The primary aim of the RCEP is to establish a comprehensive economic partnership – building on existing bilateral ASEAN agreements within the region with its FTA partners. It will be guided by a common set of rules and standards, lowered trade barriers, streamlined processes, and improved market access.

For investors, RCEP will deliver substantial new trade and investment opportunities within the participating countries – covering roughly 30% of the global GDP (US$26.2 trillion) and 30% of the world’s population to form Asia’s largest trade bloc to date. According to estimates by economists at Johns Hopkins University, RCEP will add US$186 billion to the size of the global economy and 0.2% to the gross domestic product of its members.

The Chinese Premier, Li Keqiang, described the deal as “a victory of multilateralism and free trade”, and stated that the new agreement is “critical to the region’s response to the Covid-19 pandemic.” 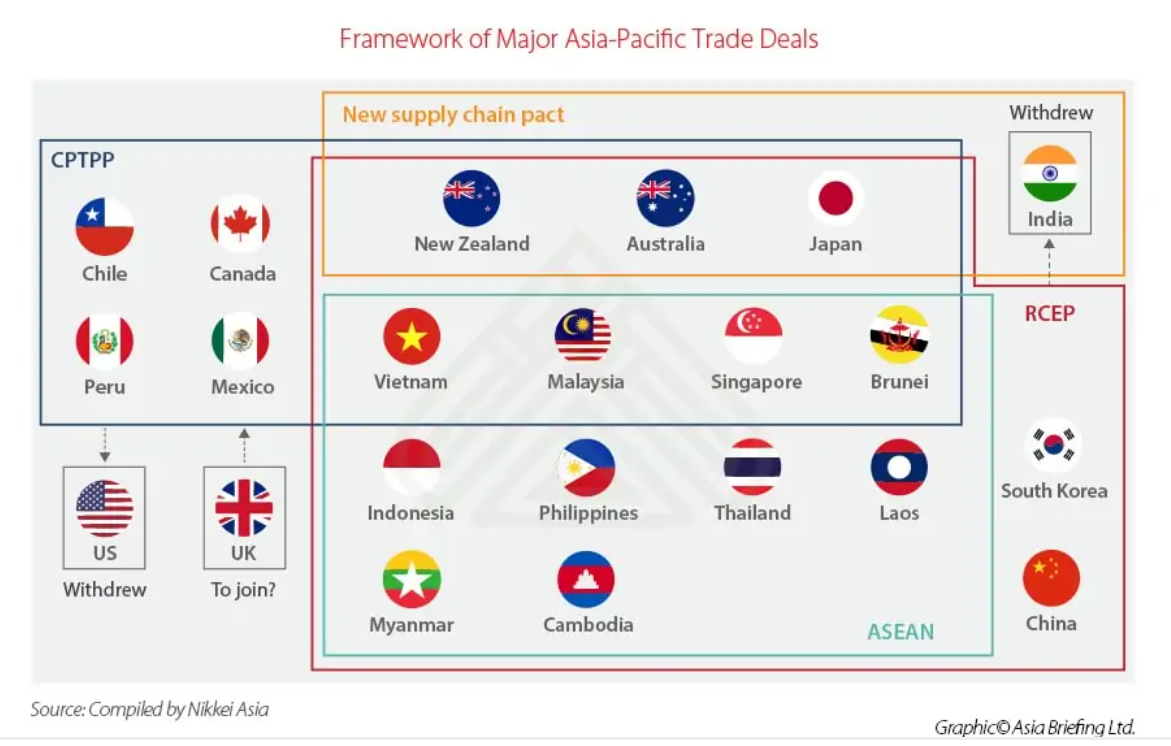 Details of the RCEP agreement
The RCEP agreement includes 20 chapters covering many of the articles typically found in a free trade agreement. Notably, it makes significant strides by way of harmonising the rules of origin and strengthening IP measures. But some critics have pointed out the weaker commitments for e-commerce and the omission of a labour and environment protection clause when compared with the CPTPP.

Common rules of origin
One of the most significant changes under RCEP is that the rules of origin will be unified for the entire bloc. This will mean that investors will only require one certificate of origin for trading in the region and can bypass the tedious processes of checking and adjusting to the specific rule of origin criteria in each country. When implemented, investors can expect lower costs, added flexibility, and regional supply chains streamlined.

Trade in goods: Reduced tariffs
Under RCEP, tariffs will be eliminated on around 92% of goods implemented progressively over the next 20 years, in accordance with each party’s Schedule of Tariff Commitments. This will allow participating countries to gain preferential market access with each other. However, some agricultural and sensitive goods will be excluded from these tariff reductions.

Trade in services
Under RCEP, at least 65% of the services sectors will be fully open to foreign investors, with commitments to raise the ceiling for foreign shareholding limits in various industries, such as professional services, telecommunications, financial services, computer services, and distribution and logistics services.

Not unlike the negative list system in China, RCEP will also take on a ‘negative-list’ approach where the market will be fully open to foreign service suppliers, unless it appears on the list. This ensures transparency of regulations and measures which will allow greater certainty for businesses.

Investment
RCEP eases the processes required for investors entering, expanding, or operating in RCEP countries. It also prevents the adoption of further restrictive measures and includes a built-in investor state dispute settlement mechanism that can be evoked by the member states.

Intellectual property protection
RCEP raises the standards of IP protection and enforcement in all participating countries. Aside from securing the protection rights for copyright, and trademark in the normal sense, it also goes further to protect non-traditional trademarks (sound marks, wider range of industrial designs) and forms of digital copyright, which goes beyond what was included in the CPTPP. 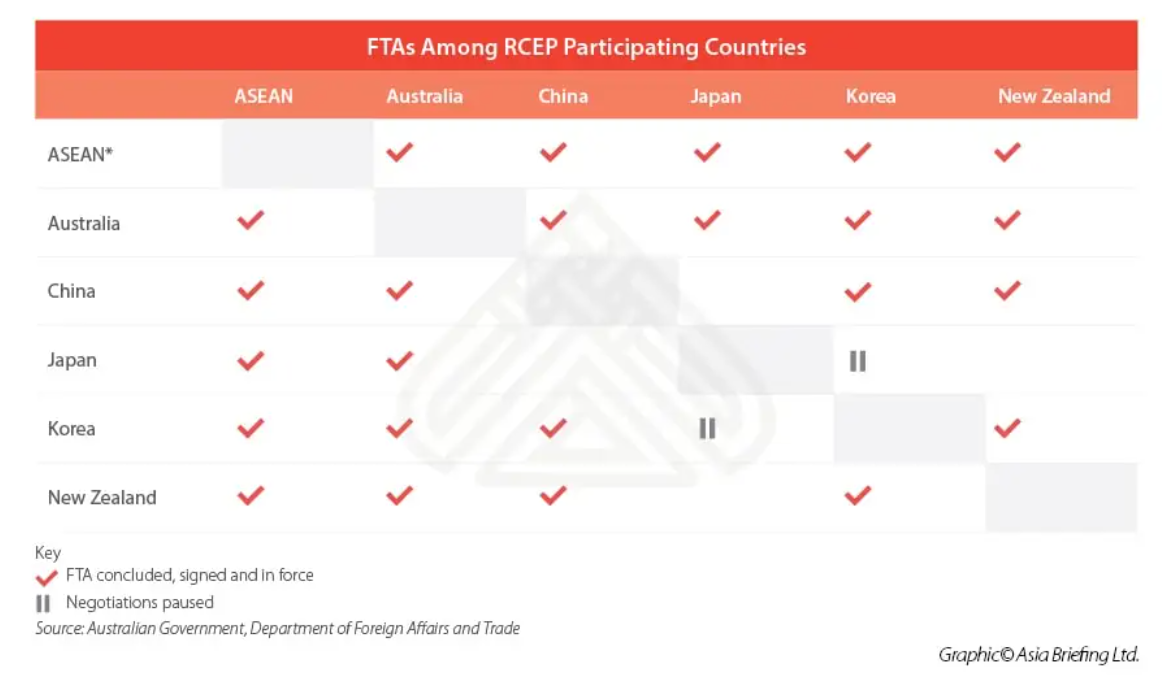 The significance of RCEP for investors in China
RCEP holds great significance for the region, for China, and for foreign investors. Once implemented it will create the largest trade bloc in Asia and is expected to amount to US$12.4 trillion in trade.

In the region, the pact is monumental not only because it amasses 15 vastly disparate Asian economies and manages to find a common working ground, but it also offers a way to coherently amalgamate multiple bilateral and trilateral trade agreements already in existence – for example, linking together some of the benefits of RCEP, CPTPP, and the New Zealand-Australia-Japan-India New Supply Chain Pact.

For investors operating across ASEAN, China, and other regions, RCEP offers good news. Streamlined customs procedures, unified rule of origin, and improved market access will make investing in multiple locations a much more viable and attractive investment strategy, and likely bring “China + 1” business models to the fore. The common rule of origin will lower costs for companies with supply chains that span across Asia and may encourage multinationals in RCEP countries to establish supply chains across the bloc, thus growing the global value chain activity in the region.

This new trading bloc will also likely see a larger flow of goods from countries where production costs are high, such as Australia, Japan, New Zealand, South Korea and Singapore to countries with lower labour costs, such as Cambodia, Laos, and Myanmar. The benefit of cheaper goods will spread throughout ASEAN and the other RCEP members, as well as filter through to consumers in Europe and the United States.

However, as many RCEP countries already have existing bilateral free trade agreements, the biggest trade impact will be on countries that do not currently have a bilateral agreement between them, such as Japan-China; Japan-South Korea, and Japan-New Zealand.

For China, Japan is its second-largest trading partner after the US, and holds a share of 6% in overall exports and 8% in imports. According to an analysis by DBS Bank, for China, tariff savings on imports from Japan will amount to a significant US$7.3 billion across the segments of transportation equipment, machinery & electrical equipment, chemicals, plastics & rubbers, and metals. However, taking into account China’s size, this will translate to a relatively low net impact of 0.05% of GDP.