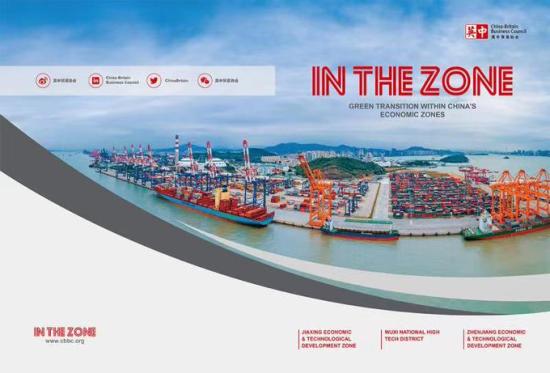 Today, the China-Britain Business Council (CBBC) launched our latest report from our ‘In the Zone’ series: ‘In the Zone: Green Transition Within China’s Economic Zones’. The report was simultaneously launched offline with a roundtable at our London office and online via a live stream with our partner, China Development Zone Innovation & Development Conference (CDI).

Following the first edition, which gave a rundown of China’s various types of economic zones, and the second edition, which primarily focussed on developments across China’s Economic and Technological Development Zones, the third edition specifically addresses green policies and development trends within China’s economic zones and the opportunities available for environmentally conscious international companies.

Green transition across China’s economic zones will be crucial if China is to achieve its carbon goals, as they contribute significantly to carbon emission data and are a powerful driving force behind China’s development. Statistics from China’s Ministry of Commerce in 2020 show that China’s National Economic and Technological Development Zones (NETDZ), despite taking up only 0.32% of the country’s geography, contributed to as much as 11% of the country’s GDP, and their total import and export volume accounted for 20.8% of the country's total imports and exports.

Since China’s NETDZs were shown to have contributed to as much as 10% of the country’s carbon emissions in 2020, and that coal is still a major energy source, they have implemented new policies and incentives in order to contribute towards China’s green transition targets.

This report profiles a number of China’s economic zones and highlights the policies these zones have implemented in order to promote China’s environmental goals and attract international businesses. In addition to providing detailed zone profiles and highlighting the presence of UK companies within them, the report features insights from industry experts on China’s green policies and discusses the various collaboration opportunities between the UK and China.

“China’s economic zones have become key to China’s efforts to pursue a green transition and industrial upgrading. This report will set an agenda and context for a series of activities and programmes throughout the year clarifying what China’s zones have to offer and how their green transformation can align with the goals of your business. We welcome the growing UK-China collaboration in this field, and building on our Net Zero Report released at COP26, believe that the UK and China working together offers great potential in tackling the critical environmental challenges we face.”

With Jiaxing Economic & Technological Development Zone (JXEDZ), CBBC has been developing a roadmap that presents their value proposition to UK companies considering a suitable location to base their business in China.

“CBBC’s ‘In the Zone’ report offers an exciting opportunity for the promotion of our economic zone and an unmatched communication channel with British enterprises, which we believe will provide readers with a detailed understanding of JXEDZ.”

Wuxi National High Tech District has also identified the UK as a key partner to realise its target of attracting international businesses with strong green credentials.

“Wuxi National High Tech District is a high-tech park with global Influence. We hope to cooperate with CBBC to strengthen industrial synergy and technological innovation cooperation, focusing on the biomedical, aerospace, intelligent manufacturing, finance and trade, and cultural and creative industries.”

With this latest edition in the ‘In the Zone’ series, as well as our comprehensive range of business and membership services, CBBC is poised to assist UK companies in taking full advantage of the policies and initiatives implemented by China’s economic zones as both the UK and China work towards achieving their green development goals.

*By downloading this report, I consent to CBBC contacting me in the future concerning UK-China trade news and opportunities. Your data will not be shared with third parties.

Browse the In the Zone series of Reports here.