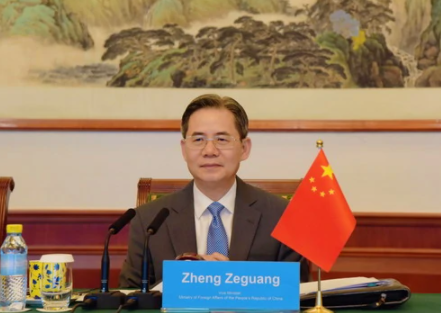 THE FORMER CARDIFF LAW GRADUATE HAS BEEN AN OUTSPOKEN CRITIC OF THE UK’S DECISION TO EXCLUDE HUAWEI FROM ITS 5G NETWORKS AND IS TIPPED AS A FUTURE AMBASSADOR TO THE US – HOW MIGHT HIS PAST DIPLOMATIC EXPERIENCE AFFECT HIS RELATIONSHIP WITH POST-BREXIT BRITAIN?

Guangdong-born minister Zheng Zeguang had been tipped by many commentators to succeed China’s current ambassador to the US, Cui Tiankai – so Beijing’s announcement in December 2020 that Zheng would take over as ambassador to the UK in 2021, replacing Liu Xiaoming when his ten-year tenure ends, came as a surprise in political circles.

Many interpreted the appointment of someone tipped to take the role of the US ambassador (China’s most important foreign political posting), as a message that Beijing was taking relations with the UK very seriously.

Zheng was born in 1963 and worked as a teacher in Guangdong Province’s Puning county between 1980 to 1982. He then studied foreign languages at Guangzhou’s South China Normal University and also spent a year at Cardiff University. His first foreign posting came in 1987, when he served as an attaché in the Chinese embassy in Trinidad and Tobago until 1990.

In the 1990s, he began laying his path towards specialising in China-US relations. He rose through the ranks at both the Ministry of Foreign Affairs’ (MOFA), Department of North American and Oceanian Affairs, and the Chinese embassy in Washington DC, working as an embassy minister from 2005 to 2008.

His appointment as director-general of the Department of North American and Oceanian Affairs in 2008 confirmed him as a US-focused political heavyweight, before he served as vice mayor of Nanjing. In 2015, he was appointed vice minister of foreign affairs at MOFA, the position he held when his move to the UK was announced.

Zheng became known for taking tough stances against the US, and many expect him to be similarly robust with the UK government.

He joins as Britain has officially left the EU, opening possibilities for fresh UK-China trade deals. But he will have to deal with tense political relationships.

Zheng’s connection to south China may also prove important when dealing with Britain’s response to Beijing’s reaction to dissent in Hong Kong. Zheng will be tasked with promoting trade with economic zones around the area, at a time when the UK has irked Beijing by offering BNO visas to Hong Kong residents holding a BNO passport.

His reputation as a skilled and tough negotiator should stand him in good stead for such challenges. He will arrive fresh from honing his diplomatic skills at high-level trade discussions with the US in 2020, amid the trade war between China and the US.

With a move to the US still expected, few predict that Zheng will hold the UK ambassadorship as long as Liu, who landed the role in 2010 and became China’s longest serving ambassador in a single post. However, coming at such a crucial point in UK-China relations, his tenure could still be just as eventful.