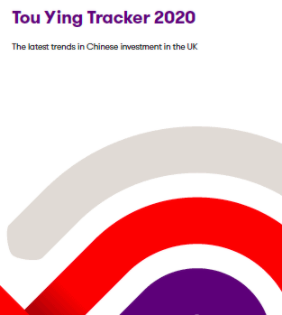 CHINESE-OWNED COMPANIES CONTRIBUTED £92 BILLION TO THE UK ECONOMY IN 2020, INCLUDING THE LIKES OF GATE GOURMET AND CLARKS. NOW IN ITS EIGHTH YEAR, GRANT THORNTON’S TOU YING TRACKER RESEARCH CONFIRMS THE SCALE OF THE COUNTRY’S CONTRIBUTIONS

The Grant Thornton 2020 Tou Ying Tracker, developed in collaboration with CCCUK (China Chamber of Commerce in the UK) and China Daily, identifies the fastest-growing Chinese companies in the UK.

To compile the 2020 Tou Ying Tracker, Grant Thornton identified all Chinese-owned companies that have filed an audited revenue figure of at least £1,000 at Companies House in at least one of the last two financial years to 30 September 2020, and that are at least 50% owned by a Chinese corporate, investor or national. This year, 838 such companies were identified. This compares with 795 in 2019.

These 838 companies represent only a fraction of Chinese companies doing business in the UK. In total, over 15,000 companies were identified that are part of a China-owned corporate group or are majority held by a Chinese national, up from some 13,000 last year.

The biggest Chinese-owned companies employ more than 75,000 people in the UK and contributed total revenues of £92 billion to the country’s economy last year.

The number of UK jobs created or supported by Chinese investment also continued to rise for the second consecutive year. Of the total, 53% of employees working for Chinese companies registered in London and the South East. The remainder (47%) – over 35,360 people – are employed in the 10 other regions of the UK, including the North West, East of England and West Midlands. Most employment (63%) is accounted for by companies filing revenues between £50 million and £1 billion.

The revenues generated by Tou Ying Tracker companies are driven primarily by a small number of large manufacturing and industrial companies with revenues over £1 billion. However, a closer focus on mid-market companies (with revenues less than £1 billion but greater than £50 million) reveals that Chinese investors are active across a range of sectors. Technology, media and telecoms, business support services, and consumer are all well represented.

Deal activity continues despite the pandemic

Mergers and acquisitions form an important component of Chinese investment in the UK. In 2020, this activity continued despite the pandemic – albeit at subdued levels. Key deals during 2020 included a £101.5 million investment into the immunotherapies development company, Immunocore, by a group of investors including Hongling (Shanghai) Equity Investment and WuXi AppTec’s Corporate Venture Fund, and LionRock Capital’s £100 million acquisition of a majority stake in Clarks.

A force for prosperity

The year ahead holds much hope for ongoing trade and collaboration between the UK and China. As the year starts, China’s 14th Five-Year Plan gets underway and the UK begins to trade as a sovereign nation for the first time in almost 50 years. Despite the inevitable interweaving of trade and politics and the tensions this creates, these are times of great opportunity. A strong and enduring partnership between China and the UK can be a force for future growth and prosperity in both nations.