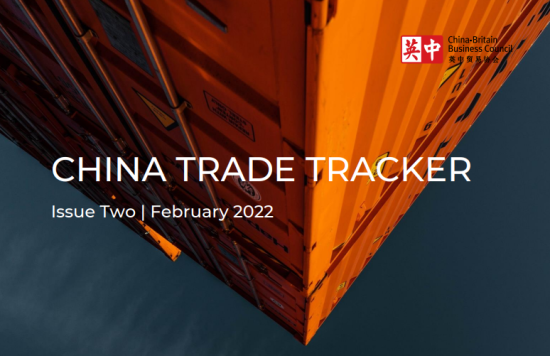 Despite the recent decline in export levels, primarily due to the pandemic, China remains the UK’s third largest trading partner, with growth prospects expected to increase as markets recover, according to the China-Britain Business Council’s analysis published today.

This is the second issue of the China-Britain Business Council’s (CBBC) China Trade Tracker, a quarterly publication offering specialist insight into UK-China trade. The report reveals that British goods exports to China increased by 3.1% in the first nine months of 2021, representing a monetary value of £13.5bn in export sales. In particular, UK exports of consumer goods and machinery have continued to rise.

Assessing all regions within the UK, the report highlights the changing trajectory of key UK exports in recent years, many of which have seen growth since 2018. The report highlights London as a key recipient of export gains, with an increase of 368.2% year-on-year in the second quarter of 2021.

However, significant gains from high quality machinery, transport, and manufactured goods exports account for the majority of sales in 10 out of 12 UK regions, with the West Midlands showing significant growth in particular. Furthermore, meat exports were identified as a major highlight, with the sector taking the top position in the Yorkshire and Humber region, with a growth of 25.9% in comparison with 2020.

During a challenging time In the UK's economy and as the country faces a cost-of-living crisis alongside the recovery from the pandemic, further impacted by restricted trading conditions both domestically and overseas, China continues presents a unique opportunity for long-term growth for British business of all sizes and all sectors.

The benefits and continued opportunities of a positive and healthy relationship with the Chinese market for UK prosperity and jobs are clear.

“British businesses are increasingly taking advantage of the opportunities presented by the fast growing and dynamic Asian markets. The growth of China’s middle class - estimated to be over 400 million in the coming decade - is at the heart of this opportunity. It Is vital for the health of the UK economy that UK business does not miss out.

“Our China Trade Tracker once again illustrates the opportunities for British companies to do business in and with the Chinese market. And seeing such impressive figures across the sectors, and across the UK, is brilliant for our economy."

About the China-Britain Business Council

CBBC speaks on behalf of more than 500 businesses and organisations of all sizes and sectors, leveraging bilateral trade and investment links to secure jobs and opportunities across all regions of the UK.