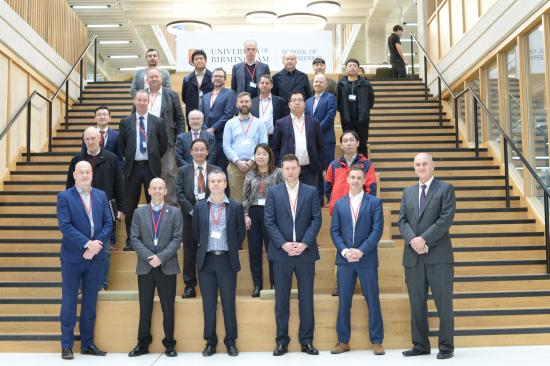 CBBC and the Birmingham C.A.S.E. Automotive Research & Education Centre successfully held a roundtable on developments and advances for commercial vehicles and new energy at the University of Birmingham on 10th January, supported by Silverstone Technology Centre, the Northern Automotive Alliance, and UK Chinese Society of Automotive Engineers, with live streaming service provided by Gasgoo Automotive.

In addition, over 20 industry experts joined in the roundtable discussion, including Chris Harris, Head of Business Development at the Centre for Advanced Propulsion; Paul Jones, CEO of the Northern Automotive Alliance; and Jay Schofield, Marketing Director of Grainger & Worrall.

The experts delivered interesting presentations on future development of the new energy commercial, vehicle market and technology, followed by a Q&A session where attendees had in-depth discussions and exchanges with the speakers. The seminar was chaired by David Gregory and was watched online by over 5,000 people across the network.

At the beginning of the meeting, David Gregory made an introduction to the Automotive Roundtable and extended a cordial greeting and warm welcome to the attendees. Professor Jon Frampton, also gave a warm welcome to the attendees with a report of current work of the China Institute with expectations for further cooperation and exchanges between the UK and China, and expressed his wishes for a successful event. 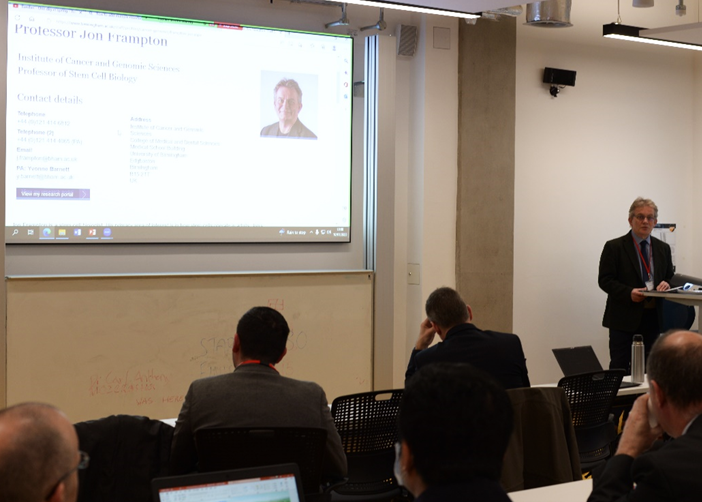 The first presentation was given by Professor Hongming Xu who introduced the C.A.S.E. Automotive Research and Education Centre at the University of Birmingham. He presented the ongoing work in collaboration with auto field in China and presented the recent 5-year project with Tsinghua University and Peking University. He later discussed the ongoing collaborative research and development projects with Suzhou Automotive Research Institute and with BYD on plug-in hybrid vehicles and dedicated hybrid engines. To end, Professor Hongming Xu expressed his expectations for further cooperation with Chinese universities and companies in the future.

The following presentation was given by Richard Shillingford consultant to BYD UK, who focused on the development and challenges of new energy vehicles. Taking electric vehicles as an example, he pointed out the current challenges of operating new energy vehicles in the context of market data and introduced the importance of further development of battery technology. To end, he gave an outlook on the future development of BYD UK.

Afterwards we heard from Andrew Murphy, Advisor Future Mobility, for BP, which focused on the decarbonisation of heavy transport. Combined with a graph of predicted CO2 emissions, he suggested that improvements in energy efficiency alone would not be sufficient to achieve carbon emissions targets. He set out three targets for BP by 2050 - zero carbon in operations, zero carbon in upstream oil and gas production processes, and a reduction in the carbon intensity of products sold to net zero. He noted that both hydrogen and purely electric vehicles will play an important role in furthering net zero in the future. 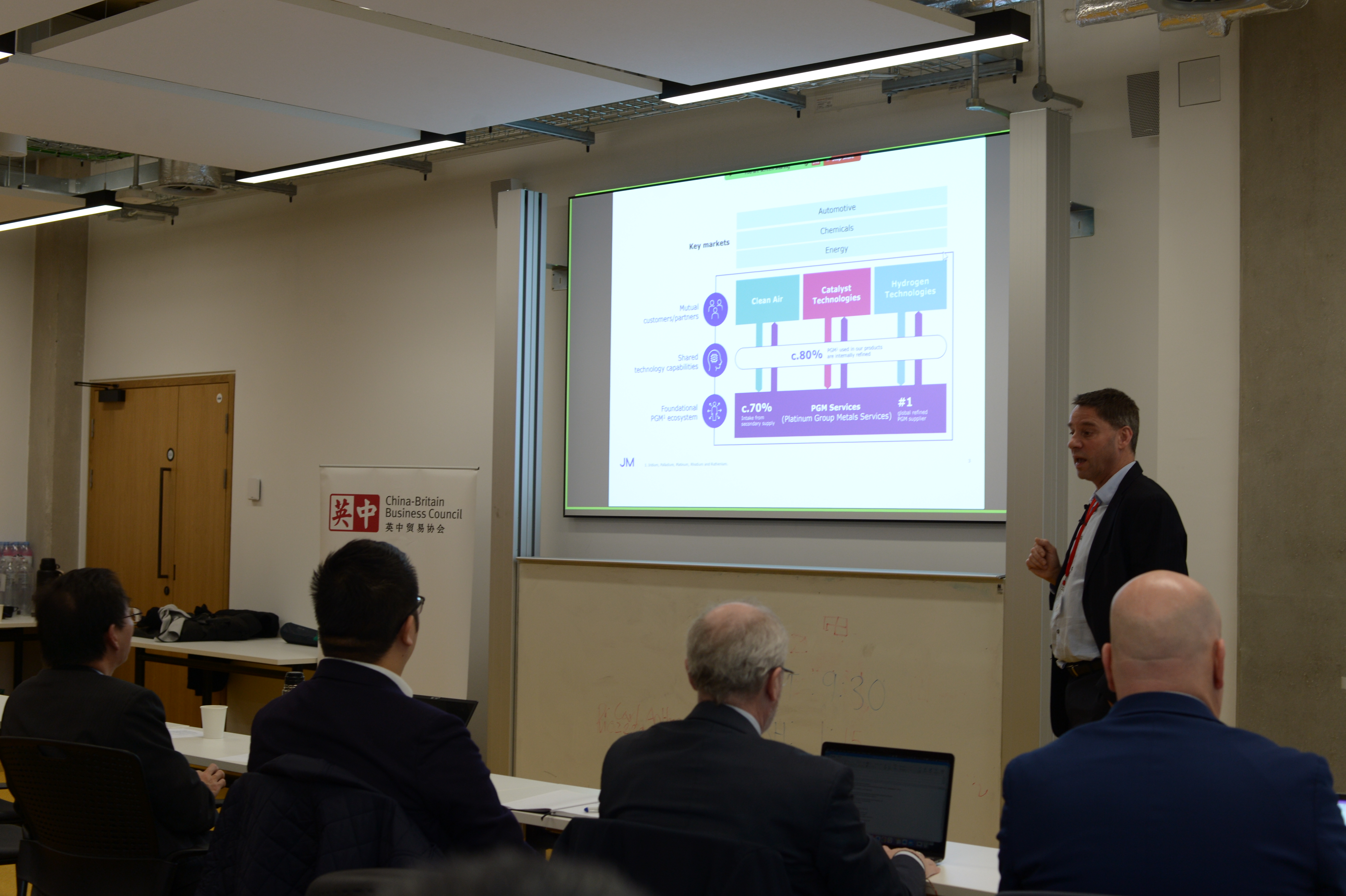 Next, Dr Mike Petch, Strategic Technical Director and Hydrogen Technology Specialist from Johnson Matthey UK, spoke on the use of hydrogen fuel cells in freight transport. By comparing the use of electricity with hydrogen energy, he pointed out that clean hydrogen energy will play an important role in the future. He also discussed the cost of hydrogen power systems in the context of government policy, which is lower than that of electric power systems. He predicts that hydrogen power systems will eventually be lower than the cost of internal combustion engine systems. His company aims to build a safe and sustainable hydrogen energy supply chain in the coming years to achieve a cleaner and healthier environment. 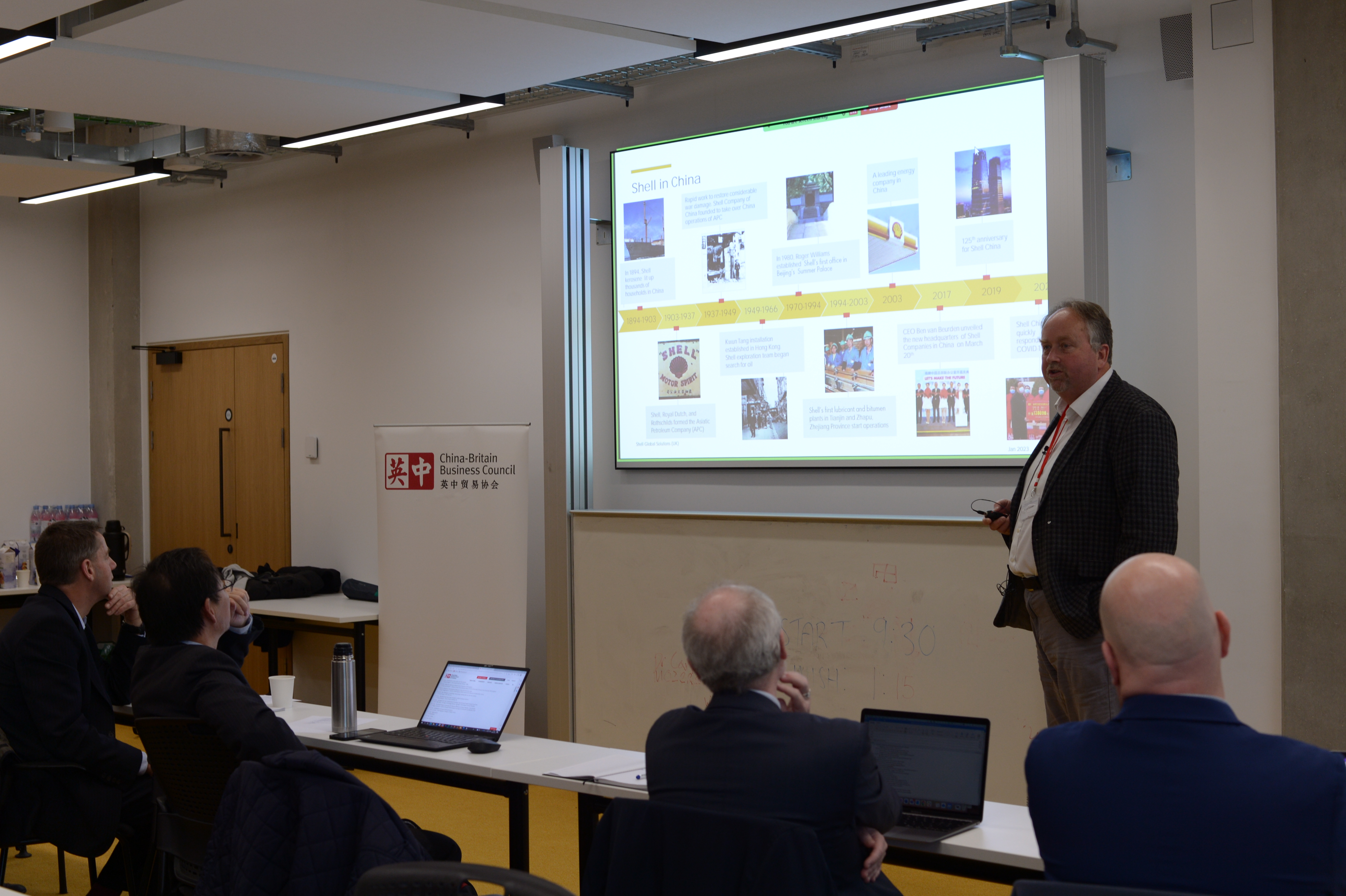 Roger Cracknell, a Senior Principal Specialist for Combustion and Mobility, Shell, gave a presentation on the Joint Research Centre for Clean Energy, a collaboration between Shell and Tsinghua University. Together with the history of Shell's development in China and several achievements, the main objective of the Joint Research Centre for Clean Energy is to accelerate the process of driving zero emissions in China. He pointed out that the centre has four main components: core project research, policy and market research, campaign promotion and partnership seeking. He then reviewed the key activities carried out in China in recent years and gave an overview of the next project on all-weather tram charging technology.

Finally, Dr Jun Qiao, Group Chief Engineer from Changan UK RandD Centrre shared his views on decarbonisation. He started by introducing the history and status of Changan Automobile and pointed out that the company plans to become a low-carbon technology company. He later introduced Changan's development and low carbon research in the field of new energy vehicles with three of Changan's recent core products, IDD, Changan Deep Blue and AVATR. To end he expressed his expectation for further cooperation in international community in the future. 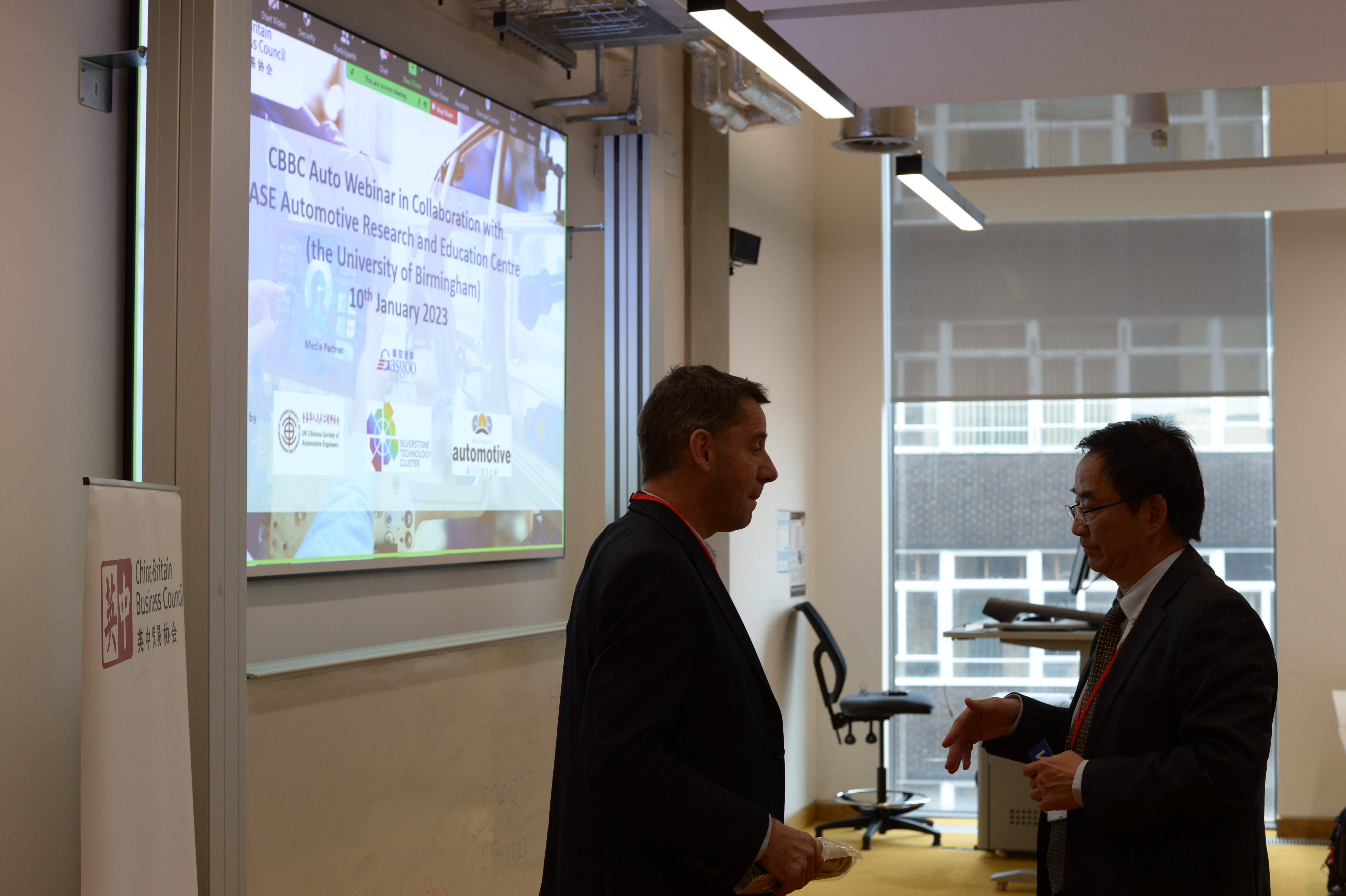 After the presentations, the attendees and audience actively asked questions and engaged in an in-depth exchange with the speakers on developments in China and the UK from different professional perspectives, followed by a group photo and a free-flowing networking lunch. The participants have showed their interest in development of the C.A.S.E. Automotive Research and Education centre in Birmingham. They are interested to join the follow-up activities discussed during this event, to explore the possibility of collaboration with the University of Birmingham and CBBC.

We are looking forward to the next Auto Round table event (more details to follow in due course - watch our events space).

In the meantime, have a look at a wide range of events we have coming up. We hope to see you all again soon.