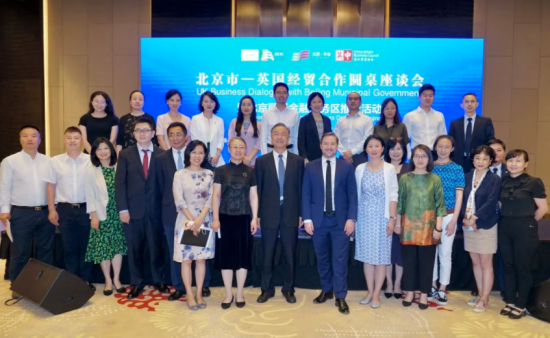 China-Britain Business Council (CBBC) co-hosted the UK Business Dialogue with the Beijing Municipal Government on Tuesday 13th July 2021 in partnership with the China Council for the Promotion of International Trade (CCPIT) Beijing and Fengtai District Government.

CBBC members took the opportunity to raise questions and comments with the Beijing Municipal Government about key concerns relating to the business environment, market access, and business development in Beijing.

A group of over 25 CBBC member companies were present at the UK Business Dialogue, together with senior officials from 10 corresponding departments of the Beijing Municipal Government and Fengtai District Government.

The dialogue was attended by Mr ZHANG Yongming, Chair of CCPIT Beijing, who shared with the audience that while COVID-19 continues to bring more challenges to the world economy, the pandemic has not hindered the pace of Beijing's opening-up. In 2021, Beijing will fully implement more than 250 reform measures in the 'Two Zones' construction, explore and implement breakthrough policies on the allocation of factors such as talent, technology, finance, and data, and accelerate the formation of an investment and trade service system that is in line with international standards. Beijing will have more open access to foreign investment, smoother data flow, more convenient capital flow, stronger talent support, stronger tax incentives, and a better overall business environment.

Sir Sherard Cowper-Coles, Chair at CBBC, responded through video by noting that 'Beijing is a city going from strength to strength, and the pace and ambition of this change is remarkable. CBBC has had an office in the city since 1986 and has had the honour of bearing witness to this city's transformation into one of the world's most active business hubs. The diversity of the British companies in the room today is testament to Beijing's ambition to level up and create a welcoming home for UK companies at the heart of China's economy. Architects, bankers, educators, hoteliers, and manufacturers the breadth of the UK economy can now be found in Beijing. I am pleased to see that Beijing has welcomed them with a dynamic and evolving business environment.'

Tom Simpson, Managing Director and Chief Representative in China, CBBC, delivered remarks, stating that Beijing remains an attractive place for British businesses and highlighting that delegates at the dialogue are actively involved in the development of Beijing and looking forward to being actively involved in new projects including the construction of the 'Two Zones'. Tom Simpson added the dialogue is just the start of a process of engagement between CBBC and our members and the Beijing Government to help make Beijing an even more appealing place for British business.

The dialogue covered an extensive range of topics, with particular focus given to cooperation on green finance, FinTech, and financial talent flow with London as a financial centre, Beijing's targets for carbon neutrality and peak carbon dioxide emissions, construction of new energy and automobile charging infrastructure, tourism development and improvement, hotel construction and service, English teacher training and vocational education, innovative drugs and vaccines, and pharmaceutical production and registration.

Before the dialogue, members also joined a visit to Uniev, an independent third-party electric vehicle ecological service platform company located in the Lize Financial and Business Area, Fengtai District, as well as Lize SOHO, where they visited a 5G laboratory within the building and reached the top of the landmark building designed by famous British architect Zaha Hadid to overlook the whole area.