CBBC members took the opportunity to raise questions and comments with the Guangzhou Municipal Government about key concerns relating to the business environment, market access, and business development in Guangzhou.

CBBC member companies and partners were present at the UK Business Dialogue, together with senior officials from 23 corresponding departments of the Guangzhou Municipal Government and Nansha District Government.

The dialogue was attended by Mr CHEN Zhiying, Deputy Secretary of the Party Leadership Team from Guangzhou Municipal People's Government, who told the audience that Guangzhou has established a long and strong trading partnership with the UK; and that Bristol, Birmingham and Edinburgh are international friendship cities of Guangzhou. The total import and export value between Guangzhou and the UK has reached USD 2.77 billion in the first 10 months of 2021, with a year-on-year growth rate of 23.3%. In addition, there were 26 newly established UK companies in Guangzhou in 2021: an increase of 18.2%, with 354 UK companies investing in Guangzhou in total.

Jo Hawley, Consul General, British Consulate General Guangzhou, also delivered remarks. She mentioned that the UK is a strong leader in innovation, infrastructure, education, health, financial services, green technologies, and creativity, which have huge synergies in China. She stated that there are already strong foundations of UK businesses in South China, with 2021 showing a growing trend in UK business collaboration in the area, which is likely to reach new records in terms of trade value by the end of the year. She concluded that: “Working together we can develop and grow our economies, share prosperity and accelerate the green transition.” 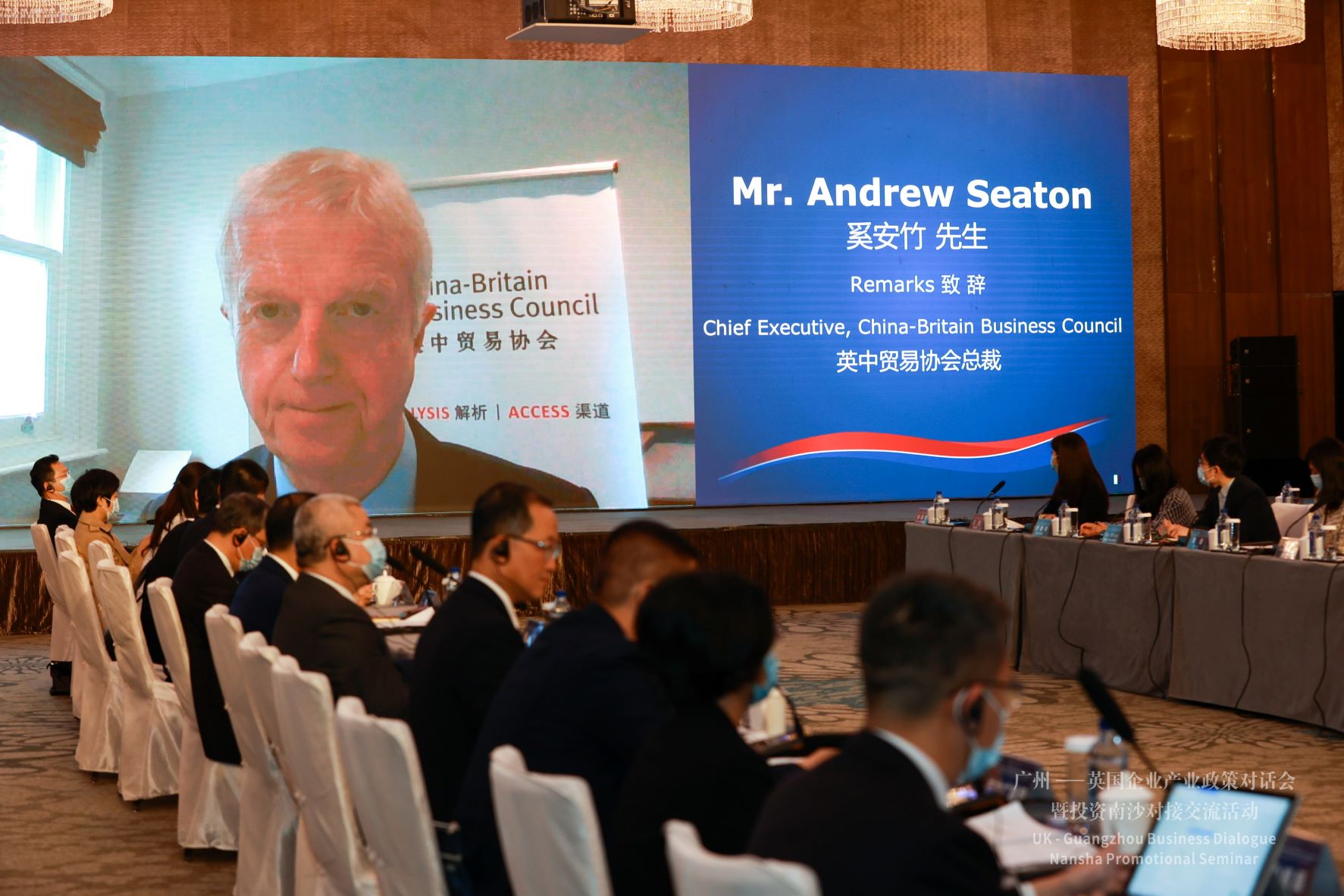 Andrew Seaton, CBBC’s Chief Executive, responded through video conference by noting that “Guangzhou is a city going from strength to strength, and it is distinguishing itself as an international business hub in sectors including e-commerce, finance, and architecture. British business is clearly doing well in Guangzhou and adding value to the city and the lives of those who live here. CBBC member companies reported positive and helpful interactions with the various parts of the Guangzhou Municipal Government that are in attendance today after last year’s meeting. The companies in the room today want to take their relationship with this city further. CBBC has had a presence in Guangzhou for 25 years and is proud of the role it plays in bringing the best of British to China, so that our respective companies can continue to find ways to collaborate and to be innovative with one another.”

The dialogue was moderated by Mr WU Bingxiang, Deputy Chief of Guangzhou Municipal Commerce Bureau, and responses to each question were provided by representatives from a wide range of governmental departments in Guangzhou, including:

Tom Simpson, Managing Director and Chief Representative in China, CBBC, delivered closing remarks, stating that this is the second year in a row that CBBC has organised the dialogue in Guangzhou. He indicated that “Financial and professional services, education, infrastructure, and technology are all major strengths of the British economy while at the same time are key industries for Guangzhou. Guangzhou is regarded among British business as an attractive city to invest due to its supportive investment environment, local talent pools, and proximity to many of the world’s leading companies. GBA integration - with Guangzhou playing a central role - also presents an exciting opportunity for UK business to leverage their presence in the region to provide services and products across Guangdong, Hong Kong, and Macau.”

He emphasised that “CBBC will continue to play our role in supporting both existing and new entrants through the work we do both here in Guangzhou and in the UK.”

The Business Dialogue ended with concluding remarks delivered by Mr CHEN Zhiying. He concluded that the dialogue is an excellent platform for mutual communication and problem solving. The new ideas and suggestions provided by UK companies are valuable and are worth being discussed and learned from by the local government departments in their future work. All government departments shall provide timely follow up on points raised by the UK companies attending, and consistently improve their services. He concluded by warmly welcoming UK companies to invest in Guangzhou.

After the dialogue, representatives from CBBC member companies joined a reception dinner, together with Mr CHEN Zhiying, Mr WU Bingxiang, and other officials from different departments of Guangzhou Municipal People's Government.

For more photos from the event please click here.