Audio Exhibition by the British Library Opens in Shenzhen 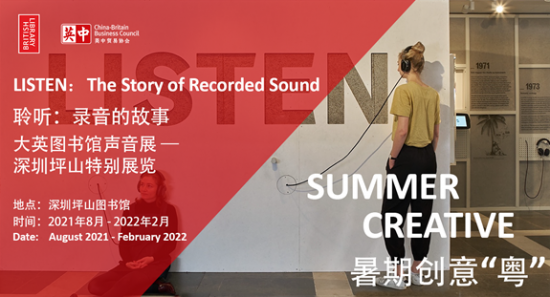 Listen: The Story of Recorded Sound – Pingshan·Shenzhen opens this month. This CBBC annual flagship event for the creative and cultural industries will run for six months at Pingshan, Shenzhen.

Listen: The Story of Recorded Sound is a British Library exhibition. It is brought to Pingshan Library in partnership with CBBC and Pingshan Media Centre (PMC), alongside Pingshan Global Promotion Centre (PGPC), sponsored by the Publicity Department of the CPC Pingshan District Committee of Shenzhen（PDCPC). It is the first time that The British Library will bring this exhibition to China to be experienced by Chinese audiences.

“We are delighted to be working with The British Library, one of the UK’s best known and most respected institutions and one with a long record of engagement and cooperation with China. The library is a long-standing member of CBBC and this project is an example of our team’s extensive work in the culture, creative and sports sector – providing a bridge for British institutions and businesses across the arts, film & TV, literature, and gaming to develop their engagement with Chinese audiences.”

“CBBC believes with the support and commitment of our partners in Pingshan, together we will be able to build upon our work together on the First Pingshan Neo-Culture Creativity Industry Expo in 2020 and this initiative with The British Library, so as to maintain the positive momentum for UK-China cultural and business relations.”

PDCPC, PMC, PGPC, and Pingshan Library, together with guests from the local art and culture communities attended the opening ceremony. Mr Jamie Andrews, Head of Culture and Learning of The British Library, also shared a video recording celebrating the launch of the exhibition.