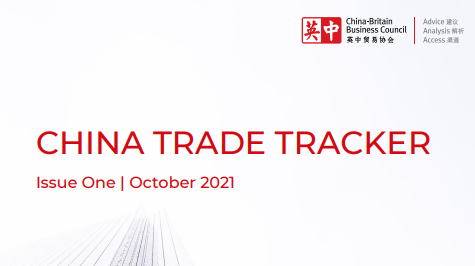 The emergence of China’s middle-class is a primary driver behind a recovery in exports, according to analysis from the China Britain Business Council (CBBC) published today.

The China Trade Tracker, a new quarterly publication offering expert insight into UK-China trade, found that exports to China grew 3.2% last year - despite the COVID-19 pandemic – while exports to Europe and US fell.

Between 2010 and 2019, UK exports to China more than tripled to over £30bn, making China UK’s third largest trading partner.

Looking ahead, China will account for two thirds of the growth in the global middle class in the next decade, equivalent to around 400million people; according to recent findings from the DIT.

Looking at all regions of the UK, the report illustrates a shift of key exports over recent years, highlighting the emergence of new export markets which have shown significant growth since 2015.

Showing the top 10 exports for each region, examples include a growth of over 650% of metals in the North East, with a value of over £180 million; and an increase of over 840% of meat and meat preparations in Yorkshire and the Humber, worth almost £68 million.

The report brings together official HMT and ONS data with CBBC expert analysis to highlight key trends and themes of the UK’s trading relationship with China – nationally, across regions and key sectors.

At a time when many UK companies are facing tough trading conditions at home and internationally, the China opportunity is more important than ever for UK businesses and jobs especially in relation to the UK's post Covid recovery.

The report highlights the benefits to the UK economy of a healthy trade and investment relationship with China, which is expected to be the world's largest economy by 2030.

“British businesses are increasingly taking advantage of the opportunity of the fast growing and dynamic Asian markets.  The growth of China’s middle class by over 400 million in the coming decade is at the heart of this opportunity. It Is vital for the health of the UK economy that UK business does not miss out on this.

“Our new China Trade Tracker has illustrated that this growth of the middle class has already led to new opportunities for high quality UK goods and services over the past decade and during the pandemic, making a vital contribution to local economies across all regions of the UK.

“China, as well as being the world’s second largest economy, is the UK’s third largest goods trading partner. It has never been more important to recognize the importance of the trading relationship with China in supporting British businesses,  jobs and livelihoods across all sectors and regions of the UK.”

About the China Britain Business Council

CBBC speaks on behalf of more than 500 businesses and organisations of all sizes and sectors, leveraging bilateral trade and investment links to secure jobs and opportunities across all regions of the UK.